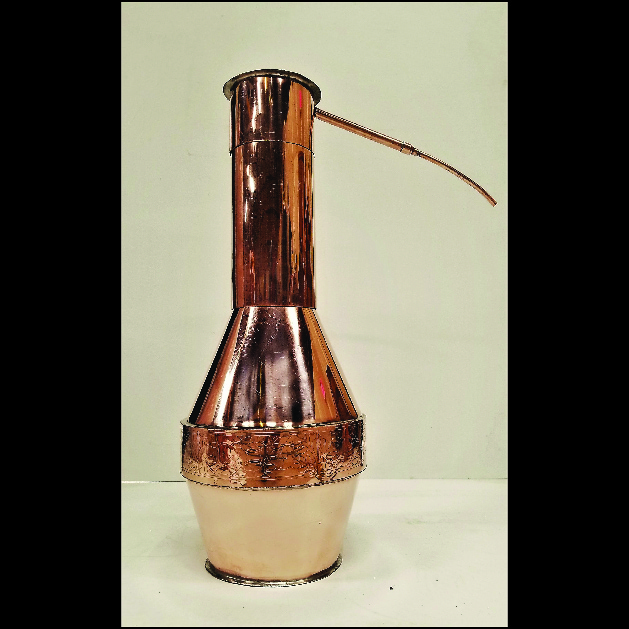 Clear evidence of alcohol distillation comes from the Arab chemist Al-Kindi in 9th century Iraq.,  where he was described by the Salerno School in the 12th century. Fractional distillation was developed by Tadeo Alderotti in the 13th century. One was still found at an archaeological site in Qinglong, Hebei province, China, dating from the 12th century. Distilled beverages were common during the Yuan Dynasty (13th-14th centuries).

In 1500, the German alchemist Hieronymus Braunschweig published the Liber de arte destillandi (The Art of Distillation), the first book dedicated solely to the subject of distillation, followed in 1512 by a much expanded version. In 1651, John French published The Art of Distillation, the first major English collection in practice, but it has been claimed that much of it derives from Braunschweig’s work. This includes diagrams with people on them showing the industrial scale rather than the operating bench.

As alchemy evolved into the science of chemistry, vessels called retorta were used for distillation. Both alembicas and retorts are forms of long-necked glass items that point to the side at an angle downwards, to act as air-cooled condensers to condense distillation and leave drip down for assembly. Later, copper alloys were invented. The folded joints were often held tightly using various mixes, for example a dough made with rye flour. These alembicas often exhibited a cooling system around the beak, using cold water, for example, which made alcohol condensation more efficient. These were called pot boilers. Today, pot retorts and boilers are largely examined by the most efficient distillation methods in most industrial processes. However, the pot is still widely used for the processing of some fine alcohols, such as cognac, Scottish whiskey, Irish whiskey, tequila, and some vodka. Pot photos made from different materials (wood, clay, stainless steel) are also used by bootleggers in different places. Small pot photos are also sold for use in home production of water with flowers or essential oils.